Conference events have been identified as a key to driving Kangaroo Island’s visitor economy in the wake of the bushfires over the 2019-20 summer.

An information session for tour providers, restaurants, transport operators and visitor experiences will be held on Friday, March 6 at 1pm at the Aurora Ozone Hotel.

Funds have been reassigned from the current round of the Australian Government’s Building Better Regions Fund grant program administered by the KI Business and Brand Alliance in the wake of the bushfires to employ a co-ordinator for conferences.

The BBRF program – with support from the Office of the Commissioner for Kangaroo Island –  has already delivered a Leadership Program, Business Marketing Program, the Tourism, Food and Beverage Expo and other capability workshops and training.

The final components of the BBRF have been re-purposed in the wake of the bushfires.

KIBBA chairman Brett Miller said it was important to address the immediate and short-term needs of those businesses severely impacted by the fires.

“KIBBA appointed a consultant, who is working closely with a dozen businesses that have been destroyed. She is assisting with grant application, insurance claims, possibilities to rebuild and so on.

“We have now identified that building the Island’s conferencing offerings we could plug the gap that has been created by the cancellation of bookings for the next six months, particularly in the international market,” Mr Miller said.

General Manager of the Aurora Ozone Hotel Mary-Lou Corcoran said she was trying to address the cancellation of hundreds of bookings for tours and accommodation for the remainder of the year, by diversifying the market offerings to attract conferencing that would benefit the wider community.

“As a member of the Adelaide Convention Bureau (ACB), we contacted them to see if they could put a call out to all their members, and we’ve had an amazing response. We already have 12 new conferences secured for this year and early next year, and many more pending confirmation.

“It’s important to understand that a conference at the Ozone will bring much-needed activity to many businesses across the Island – from the main street in Kingscote to all of the visitor experiences and other dining venues, as well as tour operators and suppliers.

“It will take some time to rebuild that international market and, in the meantime, we can build this new business that will bring widespread benefits,” Ms Corcoran said.

KIBBA has released $5000 from the BBRF funds to facilitate the conference co-ordinator for  a short-term appointment. Aurora Ozone will match that amount with in-kind assistance.

Ms Corcoran applauded the #BookThemOut initiative, which was bringing immediate benefits to many businesses.

“This new project will add to that initiative by bringing visitors over the rest of the year and into next year and build the reputation of the Island for hosting conferences.

“If you are a provider and you can’t make it to the meeting on Friday please contact us so we can work out what you can offer”. 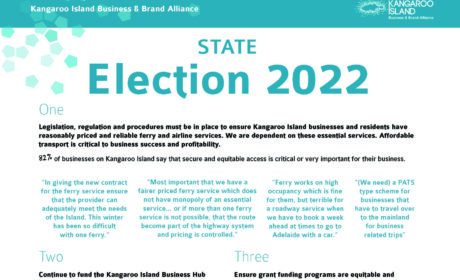 With just two months until the State Election, KI Business and Brand Alliance has released its Election22 briefing paper, to keep business issues front of mind for candidates and others in Government. A whopping 92 Brand Partners and Business Members – about 45% of our membership – responded to a survey late last year to… 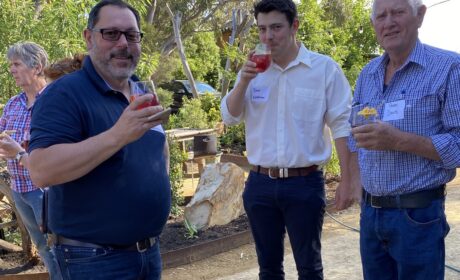 The Annual General Meeting of KIBBA at KI Spirits recently was a worthy occasion to celebrate our achievements, network with members and look forward to another year of building the Authentic Kangaroo Island brand and working with and for business on the Island. Members enjoyed a complimentary cocktail, their fill of delicious flammekueche and the beautiful gardens, all on a warm summery…